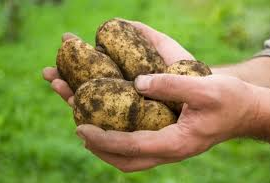 Available from mid-January until around  Easter time (late April), our seed potatoes are of Scottish and certified (virus free) quality.

We sell the seed potato in 2 ways:
Small packs of 10 seed potatoes aimed at containers and smaller vegetable plots.
Nets of 2kg are the most popular way of  purchasing and are generally used for planting in rows & in allotments.

Check our availability for 2021 here

Potatoes are one of the easiest vegetable crops to grow. They are versatile and can be grown in any garden. The general guide in planting is plant in March - May outdoors. In a poly-tunnel or glasshouse you can start in January (keeping them frost free) for early potatoes. Potatoes can easily be grown in containers and with smaller gardens becoming the norm, this is becoming more popular. See below for potato growing tips

First Early, Second Early & Maincrop - this is confusing.
Potatoes are classed into 3 types. First, Second & Maincrop. If you remember this principle (I was taught this at college moons ago!) First earlies are planted during March. Second earlies planted during April. Main crop planted during May then you won't go wrong. If the weather is out of sync then the timings may be 2 weeks earlier or later.
First earlies mature in around 10-14 weeks, second earlies in around 13-16 weeks and main crop after about 20 weeks.

First earlies. These are your early or ''new'' potatoes. Early maturing and will only keep in the ground for about 2 weeks after maturing. Great for boiling, salads, mashing and roasting. Arran Pilot & Pentland Javelin are the favourites in the Herefordshire region. They will normally be free of pests & importantly diseases such as potato blight. If you grow only in containers and want 'new' potatoes go for these. Harvest times vary depending on the variety but usually from June- July. Swift & Rocket, as the name suggests mature quickly often within 10 weeks.
Second earlies. Second earlies take 16 to 17 weeks to mature after planting, so you should be able to harvest them from very late June through to the start of August. Ideal as salad, roasting, bakers and chips. Some varieties can be left in the ground to mature such as Kestrel and Nicola. Good all-rounders and ready for harvest July- September. Often referred to as ‘salad potatoes’ because they are slightly more firm in the flesh, and therefore ideal for using in salads. Like the first earlies, second early potatoes are best eaten straight out of the ground, and will keep stored in the ground for up to a month after reaching maturity.
​Maincrop. As the name suggests this type of potato can produce heavier yields that will suitable for storing. Although some of them are firmer in the flesh than others the general rule is that main crop potatoes tend to be more floury in the flesh,  due to them containing more starch. This makes them excellent for producing chips, roast potatoes and mash, while you need to be careful not to overcook when boiling them.  Harvest from September - November and store them in cool, dark & airy place. Keep frost free. If stored in a garage or shed, cover with fleece, carpets or ideally straw if the cold starts to set in.

We will attempt to explain how to grow potatoes successfully. Its not complicated.

2)Chitting. You may have heard about people getting obsessed with chitting the potato. Relax, its not hard or sometimes necessary. The text books tell you its so important! Experience tells us otherwise. We recommend first and second earlies be chitted. Main crop can be put straight in the ground. If you have grown potatoes before and a few little potatoes were missed in previous years- what happens? Yes, they grow into  potatoes without being chitted. Pentland Javelin does this to me all the time! 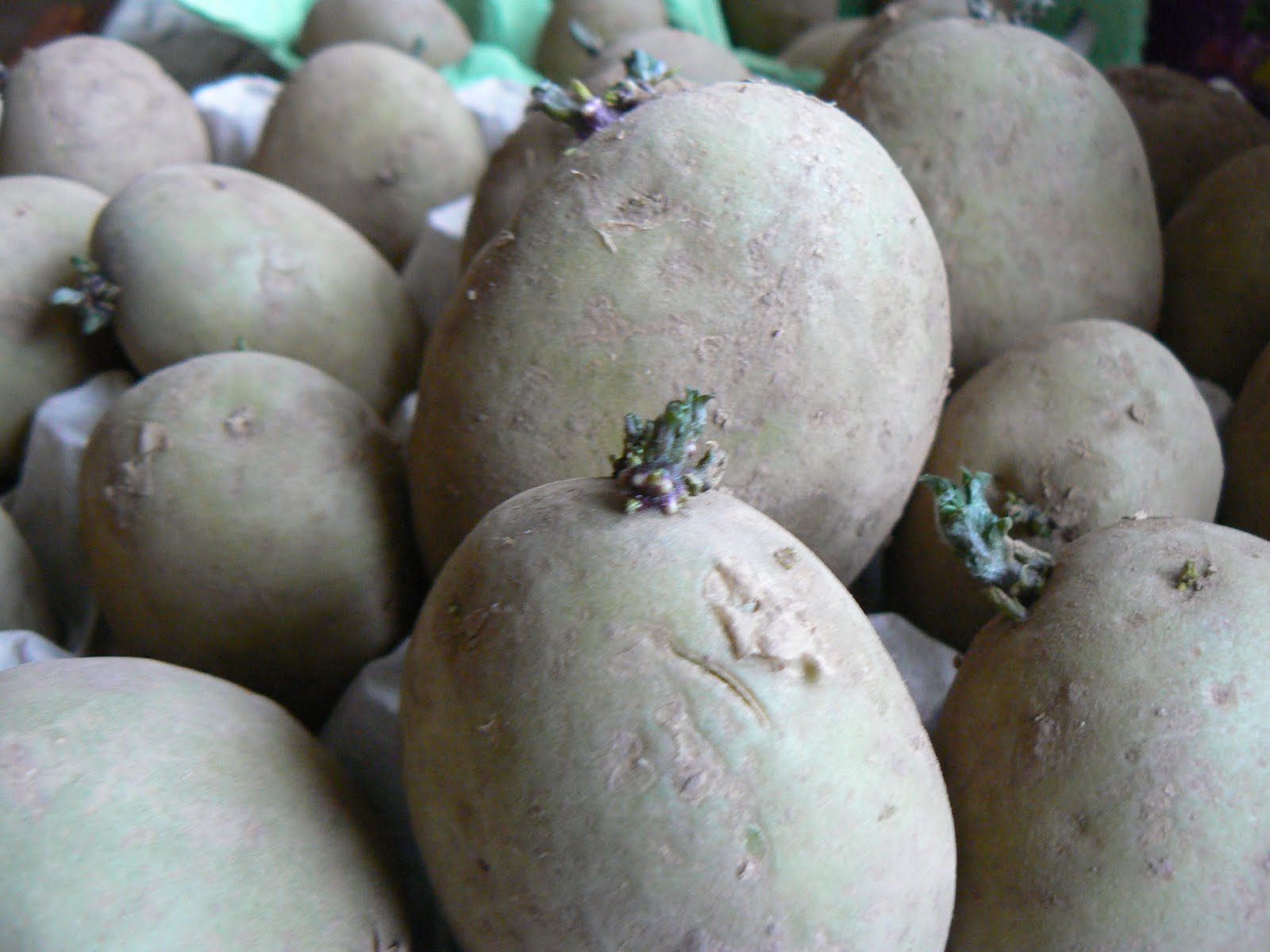 What you do when you chit your seed potatoes is basically to speed up the growing - ageing process of the potato, by exposing it to light and, more importantly, a bit of warmth. This will cause the eyes of the seed potato to start sprouting. The sprouts should be small, knobbly, and green/purple in colour. If you end up with long, white coloured sprouts, it means there is not enough light, or you're sprouting grocery shop bought potatoes (which is not a good idea.
Why Do You Chit Potatoes? The reason for chitting potatoes is that you start the growing process off before planting your seed potatoes. So that when you  do plant them out in the soil, you've given them a head start. In an ideal world, this also means that you will get an earlier harvest, and a slightly better crop as well.
How to Chit potatoes. Best done in a frost free space. A porch, conservatory or garage, is ideal, or you could use your greenhouse if you have one. Place the seed potatoes in a single layer with a large amount of eyes facing up. If you have only a small amount of seed potatoes, egg boxes are ideal. For large amounts, use seed trays with scrumped-up newspaper at the bottom, this keeps the tubers upright.Once  your tubers have got 2-3 good sized 'chits' or sprouts on them, it's time to plant them out in the ground or in containers. If any tubers have more than 3 sprouts on them, rub the excess off. This is to ensure a better harvest, as there will be less underground shoots to share the goodness sent underground by the plant, so you might get less tubers, but the ones you grow will be larger.

3)Prepare the soil
How to plant.  Potatoes will grow in most  soils. The best result are in a fine/loose garden soil with plenty of organic matter, such as well rotted farm yard manure in it. I like to dress with either gromore or pelleted poultry manure and dig/rotovate in beforehand. Also, to avoid potato diseases, you should never grow potatoes in the same place within 3 years minimum. For containers - Always use fresh compost. It is false economy to re-use the same container compost. Yields will be down and pests & diseases will multiply. A multi-purpose compost is ideal. Minimum size of container 50 litres.

4)Planting & growing.Outdoors in the garden.Planting times & distances depend on whether its first, second or maincrop. First & second earlies 12" apart and 2ft between rows. Maincrop 15" apart and 30" between rows. 6 inches deep is the norm. Earth up the stems as they grow, this helps the potatoes going green &  increase the formation of stolons (which make the potatoes!). This isn''t necessary if you use black mulching material such as polythene or weed suppressant. Timing is sometimes a worry with the earlies. Frost is the enemy. Keep an eye on the weather and if a heavy frost is forecast - get the fleece out!

Growing in containers.You can write a book on growing potatoes in containers, barrels & specialist potato kits! We say keep it simple.Always use fresh compost. It is false economy to re-use the same container compost. Yields will be down and pests & diseases will multiply.Plant at around 6 - 8 inches deep. Leave room to earth-up (add more compost as the plant grows)  or have a container with sufficient depth. Unless its a large container (1 metre /3ft in diameter) .ONLY plant ONE potato in the container.Liquid feed with maxicrop or similar every 2 weeks once the potato is growing well.Watering is crucial, make sure the container does not dry out. However, do not over water. If you do the finger test - put your finger in the soil. If the soil is moist at the end of your finger, you won''t need to water.Look out for slugs & snails. Any holes that appear in the leaves are most likely them. Act quickly.Most importantly! enjoy the fruits of your labour when they are ready.

5)Harvest.
When are my potatoes ready? There is much debate about this. Some say when the flowers have faded, some say once the haulms have browned, some say when the foliage starts to droop and lose its colour. As a rule the first earlies should be ready in about 3 months after planting, second earlies 3-4 months and main crop 4-5 months. This is a rough guide give or take 2-3 weeks depending on the growing conditions, locality and variety. There is, I''m afraid, trial and error in this. The only way is to dig down and check.
Eat or store? First and second earlies are normally eaten without storing. Main crop will store as the skin will not rub off when freshly dug up and contains more starch.
Where do I store my potatoes? Correct storage will enable you to be self sufficient in potatoes. You can keep last years potatoes in store until your first earlies arrive!. Never store potatoes in a plastic bag. All that will happen is that they will rot quickly.  Keep them  in Hessian sacks, as  that will allow the moisture to evaporate and not sweat the potato. You really want to avoid keeping them somewhere that gets too hot or cold. 2 degrees centigrade is the ideal temperature but never let them freeze or they develop a strange sweet taste. Keep them in a dark dry place. The shed or garage is usually ok. During severe freezing conditions cover with layers of fleece, carpets or straw. Periodically check for rotting tubers. You will know if one has ''gone off'' when you open the bag!! 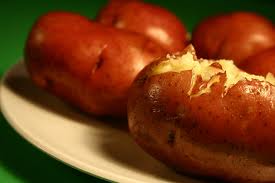 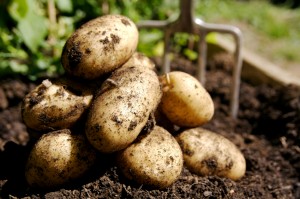 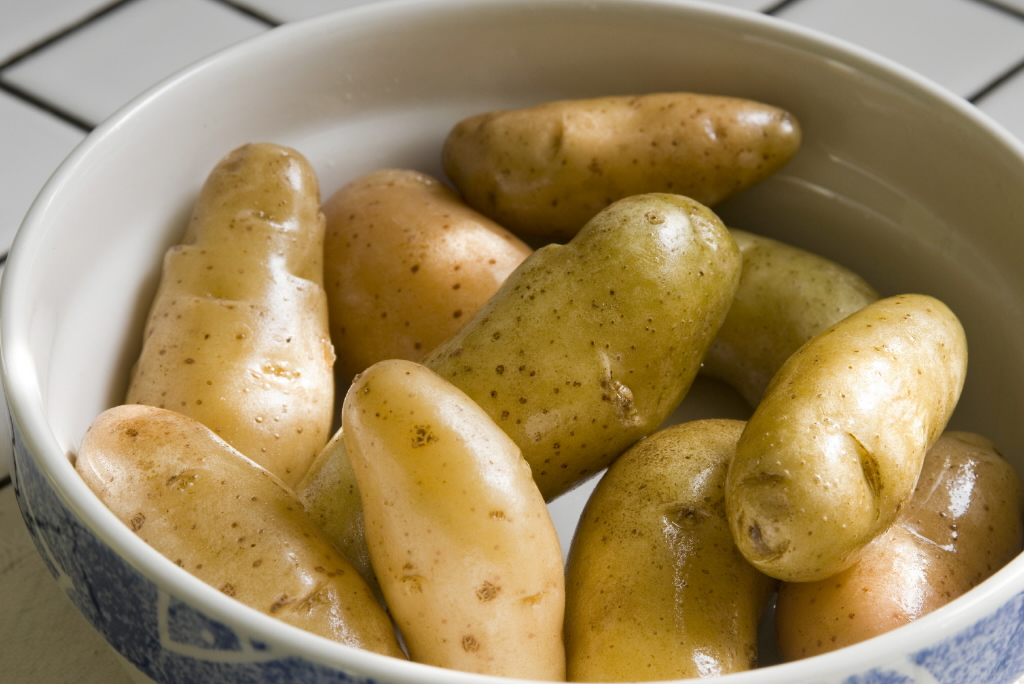 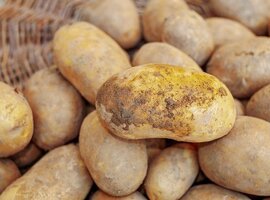 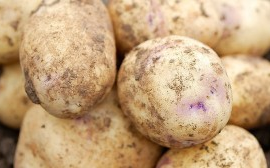 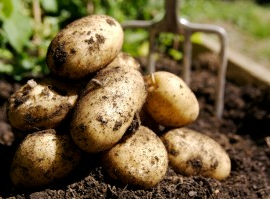 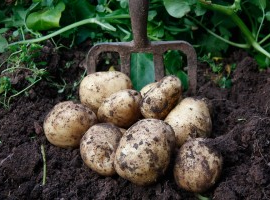